The banner is a low-tech simulation of my place through time: the first photograph is intended to invoke the tundra of the PaleoIndian period, 12,500-10,000 BCE; the second, the swamps and woodlands of c. 1630, of the contact period between the Massachusett and the first European settlers. The third photograph is of my front yard when I moved in (the yard was used as a doggie playground), c. 2007; the fourth, a photograph of my garden, c. 2010.

guest blogger Daniel Meyers, A Song of Ice and Fire


In her introduction to an essay on ecocritical studies, Karen Raber describes Ecocriticism as “the study of the relationship between literary and cultural artifacts and the natural environment” wherein “the author’s attention to the physical natural world or its conceptual influence on literature and culture is a significant component of the argument.” A Song of Ice and Fire—a book series by author George R.R. Martin and new HBO series (called Game of Thrones after the first book in the series)—is a prime example of a literary artifact that, when closer analyzed in terms of ecocriticism, can reveal much about the author’s view of the environment, his purpose behind writing the series, and, perhaps, even project the outline of where the final two books of the series will take us.
From early on in the series, Martin portrays the environment as an important part of his story’s fantasy world. All the families he introduces are very much products of their environments. The harsh land and cold climate that surround the Starks—the main family in the series—shape the family’s personality and culture, making them as harsh and enduring as the lands they inhabit. This is most visible in the family’s slogan: Winter is Coming. No fluff about honor or glory like the other families of Westeros, Winter is Coming is a reminder of the all-powerful environment and the destruction it brings—and for good reason. Winter in A Song of Ice and Fire is no typical four-month winter, but rather one that can last for years, claiming many lives in its wake. In a world where environmental hazards are greatly exaggerated, the Starks are keen to remember the omniscient power of their habitat.
The rest of Westeros—the fantasy landmass where the Starks and thousands of other families have formed their kingdom—keep themselves busy fighting wars amongst themselves in a selfish attempt to claim the throne, seemingly ignorant of the nearness of the deadly winter. The battles and fatalities for the  power of the throne are seemingly never ending, but Martin seems to hint towards the struggle’s futility in the face of the oncoming winter—if winter is truly as deadly the Starks recall, it doesn’t matter who sits on the throne. The snow covers everyone. This transcendent power of winter in Westeros’s fate could be viewed as an ecological theme in Martin’s series. The prominent families may waste their time killing one another over the power of the throne, but in the end, in the broken Westeros, all will be helpless against the power of winter .Eddard Stark knew it all along—Winter is coming.
But Westeros can be seen as more than a fantasy. It’s no coincidence Martin draws several parallels between his world and ours. As one example, Westeros resembles Britain reflected over a y-axis. (See below: Westeros first, Britain second.) 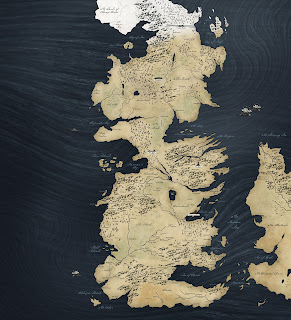 Martin also admits that The Wall of his fantasy world was inspired by Britain’s Hadrian Wall. (See below, the Wall first, Hadrian’s second.) 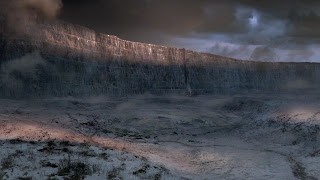 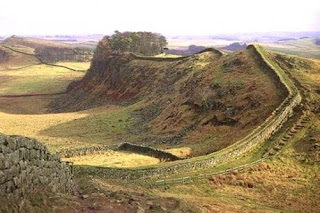 Martin is perhaps drawing a parallel to remind us that we aren’t much different from the fantasy people of Westeros. We fight and kill over petty things when in reality there is a much greater power uniting us all: our environment, the planet Earth. The people of Westeros have become disharmonious with their environment and with one another. Perhaps as a result, the mystical forest beyond their wall conjures an undead army to wipe them out: the Others. Viewing this with an ecocritical attitude, the wrath of the Others is the environment’s punishment for the people of Westeros disrupting the harmony of nature. Martin connects the Others to the environment in one scene as a storyteller tells Bran Stark that the Others bring an evil winter with them—one far fiercer and longer than any before. In this world, our greenhouse gas emissions and other environmental problems seem to be causing global warming—the never-ending summer. Unlike the people of Westeros, we have to unite if we ever hope to overcome such a force. Whether or not Martin believes humanity has the power to overcome and endure the wrath of nature will be revealed in the symbolic battle between the people of Westeros and the Others.
Martin tells of a people that lived in perfect harmony with his fantasy world: the Children of the Forrest. The Children are a mystical group of humans who were natives to Westeros (even before the First Men, contrary to the name). They lived in harmony, not only with one another, but also with their forest environment, treating the trees they lived amongst as gods. They are called “those who sing the songs of the earth” and are told to have magic abilities and connections with the forest (A Dance With Dragons). The power and magic of the Children are all but gone in modern Westeros, as are the days of their peaceful forest. Again viewing this in an ecocritical sense, the Children’s praise and care for the environment was what gave them magical power and a heightened spiritual life. When the harmony with nature ended, so did the good magic of the Children. It was replaced with the evil magic of the Others. Each magic, however good or bad, are results of the all-powerful environment. Martin believes we must have great respect for our environment, for its power is much greater than any king. We must respect our world the way the Children of the Forest and the Starks respect their fantasy world, for the problems that face our environment are very, very real—and just as powerful.

back to the garden

Kathleen Coyne Kelly
Cambridge, Massachusetts, United States
I am a professor of medieval literature at Northeastern University in Boston, and am a passionate gardener, kayaker, and fortunate companion to Nirvana the tuxedo cat and Otis the cairn terrier. In addition to my academic project on lost and invented ecologies (a study of medieval literary texts, maps, and other documents as witnesses to natural places that no longer exist or have changed dramatically), as well as more casual investigations into lost and invented places, I am finishing the first novel in a trilogy that I like to describe as post-cyberpunk, post-apocalyptic, ecotopic, and polymorphously perverse sci-fi.